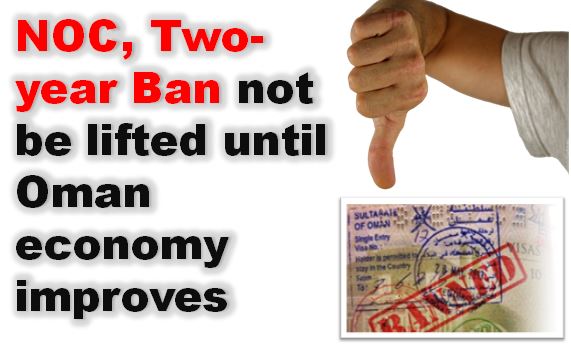 Currently Oman and all gulf economies facing a deficit in their budgets due to slump in oil prices these economic conditions forces Gulf countries to do certain meaures in order to reduce the budget deficit. As economy is down Oman own citizens faces unemployment that the reason that every gulf countries tries to implement condition on hiring of Expatriates.

Trade Unions and Government official insists that NOC will remain at least economic conditions of Sultanate improves but some of them said opposite they want to the NOC to be lifted so that experienced worker did not go back.

Companies bring foreign workers in Oman train them, companies give the opportunities but when employee find another high paying jobs they leave while breaking the rules. This rule protects the interest of companies. Said Salem Al Saadi, the advisor to the Minister of Manpower

More he Said that this rule brings stability in labor market.

The rule may be removed in recent future but still depends upon circumstances and the work market situation.

Presently expatriates only change his job in Oman only after approval of his sponsor. If his sponsor agree than he would be issued with NOC letter.

Without NOC if expat tries to leave the country or switch the job than he didn’t able to come bakc in Oman after for two years. What is Two Year Ban for entering in OMAN?
Must Join our Facebook Cummunity to get expat news about oman related to NOC, Visa, Family Visa, Driver license, Traffic Laws:

Previous Post: « Award for Workers If Illegally Terminated by Employer
Next Post: Saudi comes to the Save the Life of Pakistani Driver »