As per Saudi labor law it is strictly illegal to work from someone else who is not your kafeel. According to Kafala system in Saudi Arabia their is must be a person who sponsors you. From a long time Many of foreign workers in Saudi Arabia works without any Kafeel or work for any individual who is not his Kafeel. As these type of law is not found else except middle eastern countries, most of the Expatriates not consider it right but now it not easy to stay hidden everyone must have to follow Kafala system to avoid any legal penalties from Saudi interior ministry. 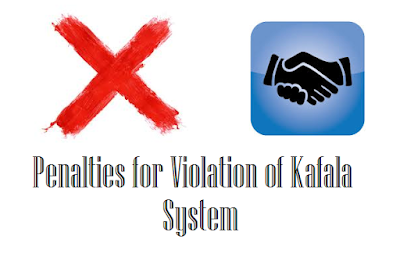 Penalties on Expatriate Working for someone Other than Kafeel

Individual who caught in violation of  Sponsorship law is deported from country on his employer expenses and deprived from the right to work or live in Saudi Kingdom before the time lapse of two years from deportation period.

Entrance in Other GCC countries:

The person who violated this law is totaly banned for entrance or work in other GCC countries. Gulf Cooperation Council(GCC) contain these countries Saudi Arabia, UAE, Qatar, Bahrain, Kuwait and Oman.

In order to stop the entrance of person, ministry of foreign affairs Confiscate his copy of travel documents which prevent him to come back before his deportation period of two years.

Penalities become more and more harsh since may 2013 new laws were made to keep Kafala system obeyed. Now those expatriates who works illegal other than kafeel or without any sponsor(kafeel) have to face Saudi riyal 100,000/-, jail of 2 years, final exit and black listing to come again to Saudi Arabia from Jawazat(Passport Office).