Exit Reentry visa common known term among all Saudi expatriates especially who go back their home country on Vacation from jobs but what is Multiple Exit Reentry visa for what this visa is used for and how to get this visa, its fee and other things. Expats may also knows about Final Exit Visa which is issued when employees job contract is ended and issued with final exit visa so that employee could get new visa and get back to new job in Saudi Arabia or just stay in his native country. Single Exit Reentry is given to those persons who were going back to their Home country on Annual leave, all of fee and other charges of single exit reentry is given by Sponsor.

What is Multiple Exit Reentry Visa: 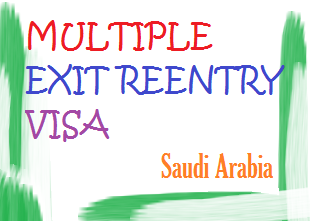 The validity is Six months and you must have to travel within 3 months after issuance of visa. Also you must posses IQAMA and Passport having Validity within validity period of Multiple Exit Reentry Visa.

How to Get Multiple Exit Reentry Visa:

Lastly I’ll discuss more about this visa issuance in future articles for those who want to issue Multiple Reentry Visa to Dependents, Wife or other family members.