Saudi Arabia said on Friday it would issue tourist visas for the first time in its history, opening its doors to tourists to diversify its oil-dependent economy.

A HISTORIC MOMENT FOR SAUDI ARABIA:

The Chairman of the Board of Directors of the General Authority for Tourism and Heritage, Ahmed Al-Khatib, said opening the doors of Saudi Arabia to foreign tourists is “a historic moment for our country,” according to news agency “Agence France Presse.”

Al-Khatib said the kingdom would relax the dress code for foreign women and allow them to move around without wearing the abaya.

Informed sources told Okaz newspaper that the tourist visa will start on Saturday and the promotion will start from 14 capitals around the world, including London, New York and Burj Khalifa in Dubai.

The sources pointed out that the tourists will receive the visa electronically in a period of time not exceeding 7 minutes. This launch of the tourism sector is one of the most essential foundations of Vision 2030, a plan to prepare the country’s largest post-oil economy.

The visa fee will be SR 300, the National Insurance fee is SR 140 and the total value is SR 440 paid by each tourist, in addition to the added value and treatment fees. The validity period of the visa will be 360 ​​days from the issuance. The period of stay in the Kingdom will be 90 days for each visit. Over 180 days per year.

According to Bloomberg, Saudi Arabia’s visit to Saudi Arabia has been limited to pilgrimage, Umrah, work or family reunification until Crown Prince Mohammed bin Salman announced his ambitious plan to diversify the kingdom’s economy. Economic. 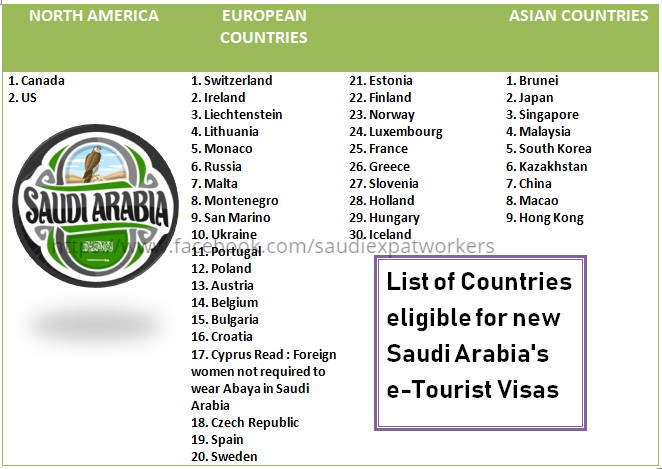 Giant projects
Tourism projects that the Kingdom has begun to accomplish include turning the long coast of the Red Sea into an attractive area for tourists and holidaymakers, as well as establishing an entertainment city near the capital Riyadh.

Saudi Arabia first opened the door last year for foreigners to apply online for visas to participate in conferences or attend special events held inside the country.