WhatsApp was the first to reach the battle for mobile messaging, and hence proceeds much of his success. As described in their blog, when WhatsApp began their wanderings in 2009 the mobile ecosystem was very different: the 70% of mobile selling system they had Nokia or BlackBerry.

It is not surprising therefore that WhatsApp is available for a range of platforms “minority” that a new application would normally overlook. This is the case of the version of WhatsApp for Symbian , Nokia Series 40 , Blackberry or older versions of Android like Android 2.1.

Times have changed over the last seven years, and now Android, iOS and Windows Phone mobiles account for the impressive 99.5% market share. Its Not seem to make much sense to continue efforts to maintain version for systems with “few users”, and therefore the official support Android 2.1, Blackberry, Nokia and WP7.1 will end before the end of the year 2016. 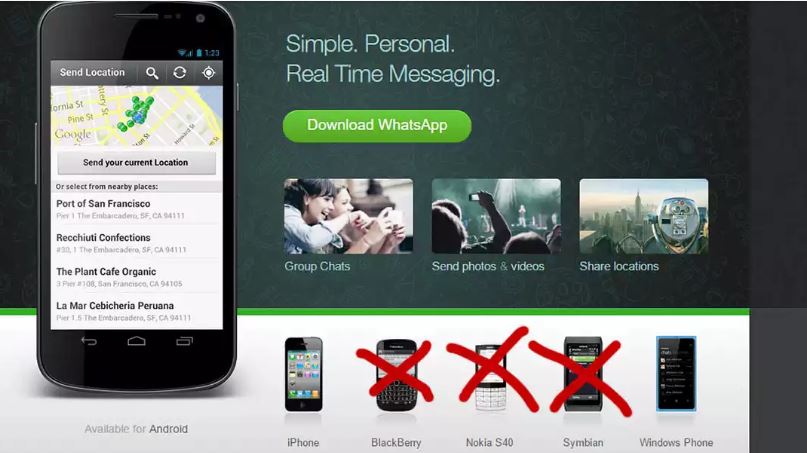 WhatsApp will stop working in the following platforms:

BlackBerry, including the BlackBerry OS 10

The Nokia S60 with Symbian

All devices with Android 2.2 Froyo or lower

All devices with Windows Phone 7.1 or lower

The reasons are more predictable: today 99% of people do not use these operating systems . Maintaining support and updates for them are a waste of money by WhatsApp, so at the end of 2016, WhatsApp will stop working on them .

In figures, Android 2.2 Froyo occupied only 0.1% of all Android devices on the market last January , while Symbian operating system died in May 2014 . BlackBerry has already taken the step to fabricate devices with Android and Windows Phone has already reached its version 10 , leaving obsolete the older version 7.1.

The solution is obvious: upgrade to the king of today ‘s operating systems: Android, iOS or Windows Phone . The cheapest solution is certainly Android because you can get phone at full version for less than 100 euros . No doubt, WhatsApp will continue to maintain in them for many years yet.

Clearly this is not bad thing for WhatsApp, which recently reached one billion users, earning 100 million in just the last 4 months. WhatsApp, bought by Facebook who will make two years, is completely free and does not integrate ads any kind in its application.

Previous Post: « Want to Get Bonus Salary in Saudi Arabia Here are The Conditions
Next Post: Free Upgrade to Business Class From Oman Air On National Day »