May Allah give all of us One chance in our life to visit Holy Kaaba, for those who see Holy Kaaba might seen a Eight pieces of Albaster perceived on the right door of Kaaba, Albaster is most rare and precious type of Marble that is usually used for carving of sculptures from ancient time. There many varieties of It like onyx-marble, Egyptian alabaster, or Oriental alabaster but this one on kaaba is also know as mary stone and it is almost 807 years old.

So what is the story behind them why they engraved on right door of the Holy kaaba gutter, the research made by Presidency of the affairs of the Two holy mosque Explained that

These eight pieces are gift from the Caliph Abu Jafar al Mansur, he gave them during the restoration of terrace Grand Mosque in the year 631. The date is also written under the blue color stone which is also from one these pieces.

These albaster contains inscriptions hundreds of year old from which largest is 33cm long and 21 cm wide. These 8 pieces were located in lower area away from circumambulation terrace(A little terrace surrounding the Holy Kaaba). 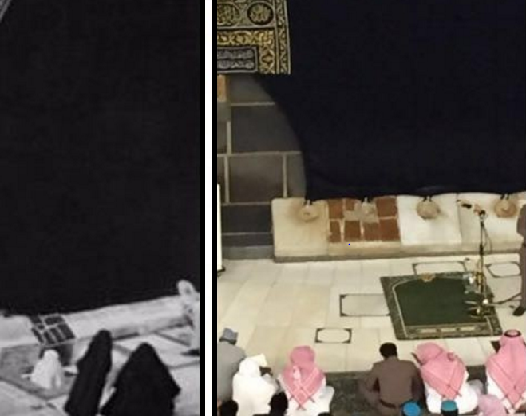 The place of pieces is opposite to the site where angel Gabriel teaches Prophet Muhammad(peace be upon him) how to pray.

One of tragedy is also happens to these pieces when they were stolen in 1213 hijri and later restored after founded from the man who dead and left them in his heritage. They were restored to their original position in 1377 hijri.