Council Members Shoura have suggested to grant nationality to Children of Saudi Mothers regardless of their birth place. According to one Shoura member the nationality laws were not amended for almost 60 years. There are some changes in 2004 and 2007 but still these are not enough Saudi Mothers and Non Saudi father faces many difficulties if they want to obtain Saudi Nationality. 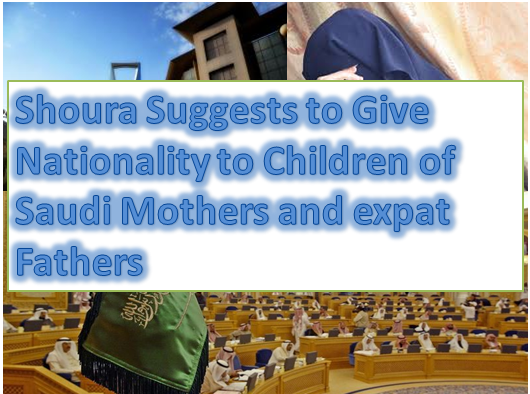 Saudi Arabia is now an advance economy Saudi cities are growing massively so it is current need of people that shoura amends the nationality laws. Children of Saudi Mothers and Expats Fathers faces social and security inequalities because they don’t have status of Saudi National.

Many Saudi Women marries to expatriates and the rate is increasing. Saudi Women has right that his child is given with all rights to get nationality in Saudi Arabia. The current system is making hurdles to fulfill this right of Saudi Women

The shoura reject the proposal to study the permission for driving for Saudi Women meanwhile shoura approves some amendments to several articles which were protection of water resources, public utilities, treatment of waste water for reuse SPA.