Ramadan is just few months late than Islamic Festivals Sessions will Start but after that hajj is one the biggest event of Muslims for which every Muslim country make arrangements as early as possible even they have own committees and ministries for hajj. This hijri year 1438 More Pakistanis will get the chance to perform the most holiest and spiritual journey of their life as Saudi Arabia increased the hajj quota for Pakistan after which 179,210 pilgrims from Pakistan perform hajj this year, previously the quota is 143,368.

Pakistani Religious Affairs Minister Sardar Mohammad Yousuf  shared that the agreement is made with Kingdom to add 15,000 more pilgrims in quota set for Pakistanis. 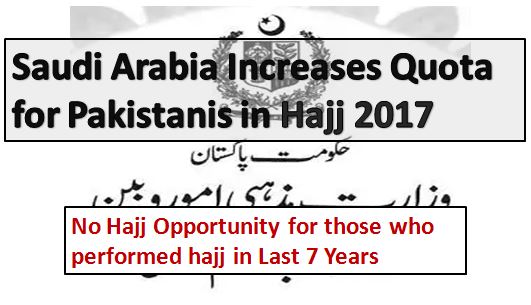 No Hajj Opportunity for those who performed hajj in Last 7 Years:

Prime Minister Nawaz Sharif also approved the proposal from Ministry, in which hajj applicants  who have performed hajj under government scheme in last 7 years will not given privilege to perform hajj this year.

While Hajj-e-Badal will be performed through Private Hajj/Umrah Operators.

Hajj Application in Government Scheme is increased by 300% from  86,919 in 2013 to 280,617 in 2016, minister also said that they already starts arrangements for hiring, transport, catering, camps and other issues.