Saudi Arabia is going through economic hardship but still Saudi Govt tries its best to maintain every aspect of people social and economic life. Expatriates in Saudi Arabia faces problems in this year mainly because of unpaid salaries but Saudi Arabia is now seeing to pay dues to private companies before ending of this year which allows companies to pay wages to its worker especially blue collar workers mainly expatriates. The decision is taken by a committee headed by Deputy Crown Prince Muhammad bin Salman said Monday. 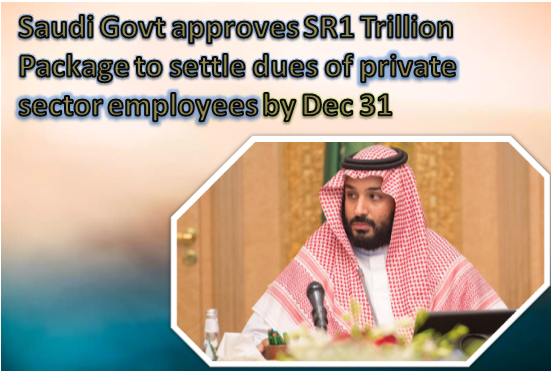 The package of procedure and solution to settle down the dues with private companies was made which will be presented to Custodian of the Two Holy Mosques King Salman. The package is implemented as early as possible before ending of this year.

The package also focuses on major projects and some other second priority projects so that to halt payment for those projects which were not on priority list hence in this way Saudi govt able to save funds for payment of dues to Private Sector which were equal to around SR 1 Trillion. These payments were late due to the obvious reason the sharp fall in oil prices. Saudi Govt already taken many steps to reduce their extra expenditures and cuts funds from mega projects.

These arrears causes huge loss to construction sector as many of expatriate workers working on construction projects that is way they have to bear the cost of late wages. Even companies like Saudi Oger become totally bankrupt.

Saudi Arabia has taken a series of measures, including subsidy cuts, reductions in Cabinet ministers’ salaries and delays in major projects.
According to SPA, billions of riyals have been saved by rescheduling and modifying contracts, while “a large number” of projects were stopped, saving tens of billions more.

Previous Post: « Paying Visa Fee is Responsibility of Employer in Oman
Next Post: How Transfer SAWA STC Credit To India »