People might thinking after severe introduction of fee and visa fee on expatriate in Saudi Arabia the expats might fed up and travelling back while new expatriates workers have fear to come in Saudi Arabia but the scenario is different According to General Authority for Statistics (GAS) KSA there has been 12.17 percent rise of population of expatriate during third quarter of the last year 2016. 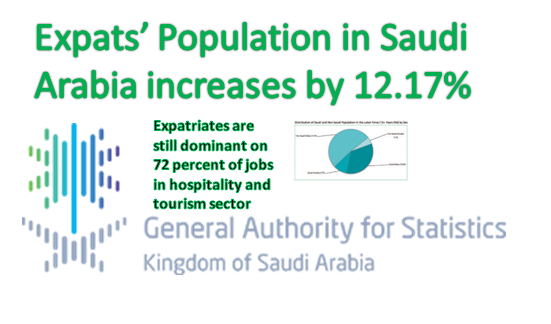 Latest statistics show that number of expatriates in kingdom were at 10.2 million in 2015 which will risen to 11.6 million in mid 2016.

The exact total number of expatriate population in Saudi Arabia arrived in year 2016 is 1,419,905 according to GAS statistics.

The number of male expats increased 922,649 in 2016, men expatriates currently have numbers in 8.3 million risen by 7.8 percent as compare to their number in year 2015. To get more comprehensive information about population in Saudi Arabia Visit http://www.stats.gov.sa/

Expatriates are still dominant on 72 percent of jobs in hospitality and tourism sector as compare to 28 percent Saudis.

Total Population of Saudi Arabia as shown in GAS Website

GAS survey shows that saudi nationalist having age between 25 to 29 have higest number of unemployment rate that is 39 percent of total unemployment in Saudi Arabia.

These number may turn down the expatriate population after the implementation of new monthly fee on each dependent iqama. New Dependent Iqama Fee in Saudi Arabia