NOC must be scraped in the favor of those employees who were citizens or residents of GCC countries, for those who don’t know GCC countries are Bahrain, Kuwait, Saudi Arabia, UAE, Qatar as well as Oman.  A leading economist said that Oman must favour GCC residents and remove NOC requirement for them.

In the interview taken by Time of Oman with Dr Nasser Saidi who is the member of IMF regional advisory group MENA Region, he said the removing NOC for GCC wide Work permits allows expat workers to change their jobs in between other GCC countries, which also reduces the challenges due to low oil prices.

He also empathizes upon removal of sponsorship system at whole GCC level and laborers should be allowed to move between GCC for new job opportunities. 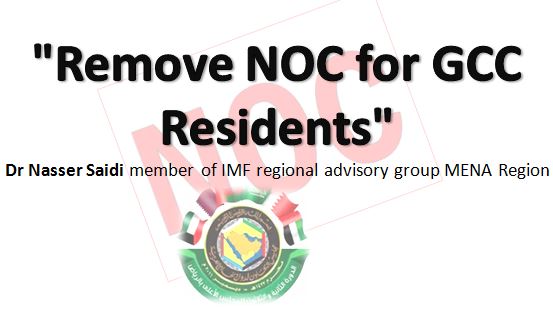 Removing the NOC and other related conditions raise the productivity of economy, reduce the impacts of domestic and foreign economic pressure and also diversify the economic activity.  Making labour market more attractive for existing and new businesses, attract skillful workers that were needed for skillful based business and services.

Trade Unionist in Oman said that  No-Objection Certificate must be removed for all expats, we know that NOC is used by employers to exploit workers, it should be scrapped or changed. Currently expat worker need NOC to move from one employer to another if they did not get NOC and try to move to other employer they were deported and banned for 2 years for entering in OMAN.