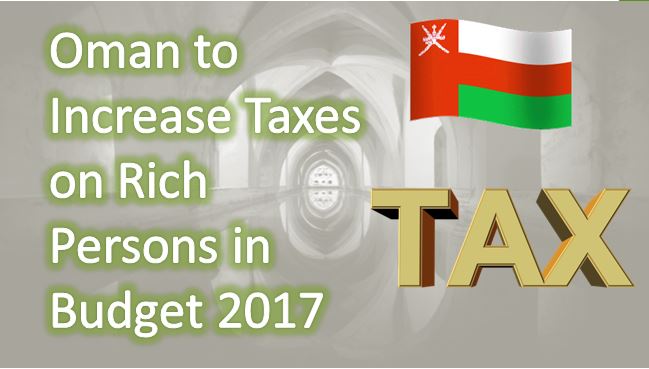 Oman’s riches will be targeted in next budget of 2017. The new taxation system is developed to increase the revenues and decrease the deficit.

Oman is planning to draft a new measures in the budget of 2017 as oil prizes were projected to be constant during next year of 2017. As Oman is mainly depended on oil revenues so this low prices really affects economy but this can be diverted by boosting non-oil revenues.

Measures in suggestions such as levies on ministers cars, cutting subsidies in electricity and petroleum Gas. While diesel and Gasoline was already subsidies were already stop earlier.

Ministry of finance published 20 circulars to control and manage to increases revenues and spending. 2017 budget is clean form any type of salary reductions and there no cuttings of any service provided to citizens.

To increase revenues other than oil Oman will increase and implement Tax on Rich people while there is not tax for middle class and low income citizens.

The minister added that the budget would be similar to 2016’s, which predicted a OMR3.3bn (Dhs31.47bn) deficit.

The whole gulf is effected with low oil prices Saudi Arabia cuts his ministries salary as well as many other perks. Oman is also taking steps towards boosting of non oil revenue but Oman is totally different from other gulf countries due to its amazing tourism destinations which is boosting more and more every year.