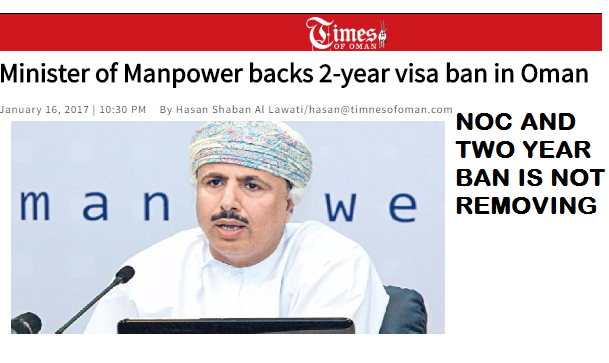 The Question regarding NOC and Two year ban of Oman is still in discussion while yesterday when Minister of Manpower Oman Sheikh Abdullah bin Nasser Al Bakri give the update that oman will soon introduce new Labour law. May be many of us thinking that in new labour laws NOC and two year ban will be no more included but the expectation were breaks today when oman Shura council member agreed with Manpower minister that two year ban and NOC will stayed and not be removed.

According to report given by Times of Oman, Shura council members totally want to retain this visa rule council discussed in the session with Sheikh Abdullah bin Nasser Al Bakri, Minister of Manpower.

You can read more about what is NOC in Oman Residency Act and LAbour Laws and what is meant by two year ban in Oman.

Neighboring Gulf countries already removed the most strict laws from their labour laws the most latest example is Qatar who totally scrape old system for labour laws and introduced more flexible provisions in law for job changing and getting new resident permit.

Expatriate population will rise to 60 to 65 percent by next 10 years. No one accepts to be minority on their own country told by another shura member Hilal Al Yahyai

Al bakri said that rate of expats is higher than we expected but this is due to development requirement of Oman we need laborers and workers in construction sector where Omanis don’t work.
Must Join Oman Expatriates Community

In November last year a member of chamber of commerce (OCCI) said that NOC will stay in oman but with specific conditions, according to him we don’t terminate whole of this, workers will instantly move from one employer to another which is not good for previous employer. However if expatriate give a valid reason to be issued with NOC he should be given with the NOC, he neither be retain in his previous job nor he i’ll face two year ban.