Amnesty period is started from march 29 for those expats who violated labor laws, iqama laws, residency laws and overstay on their visas. Illegal expat workers who report themselves at MOL of Jawazat they will be voluntarily freed to go to their home country without any kind of severe penalties and jail, even they come back again on new visa and start working again in Saudi Arabia legally.

Also those expats have any chance to renew their iqama may also be facilitated and start their job again without going back. Anything related to labour violation from employer may also be taken in to labour court for further clearance of the matter. 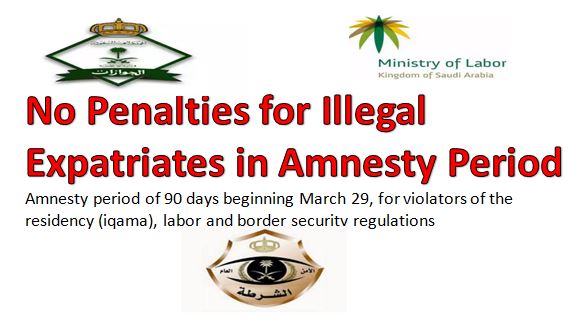 This campaign is called as “Nation Free of Violators” according Crown Prince, started to make country free from violators of Saudi Laws related to expats.

The campaign aims also those who did overstay on their hajj, tourist, umrah or transit visa. These type of violators deported from Sea Port where they will be deported to their respective countries.

While those who violates work, residency, iqama or labour laws may have to report to Al Jawazat( Passports Department or Ministry Of Labor) where they have to follow the certain procedure.

Expatriates who entered the Kingdom illegally

Embassies in Kingdom are also notified with amnesty Scheme of 90 days.

FINGERPRINTS WILL NOT BE TAKEN: Fingerprint of Violators who report themselves during this 3 month period will not be recorded so that they get chance to revisit Saudi Arabia again.

In the year 2013-2014 almost 2.5 million illegal individuals were deported from Saudi Arabia in amnesty scheme