The  plan to set the limit on expat entering in Bahrain have been rejected by Kingdom Council of Representatives. A Good news for more than 666,172 expatriates from different parts of the world living and working in Bahrain.

Same as all other GCC nations Bahrain also wants its own citizens to get employment in different sectors where expatriates are on higher concentration. 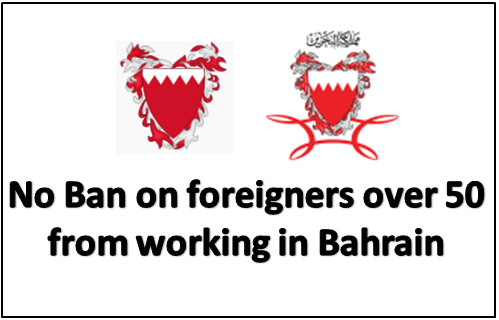 But 50 Year age ban rejected by Bahraini Government as well as LMRA and BCOCI( Bahrain Chamber of Commerce and Industry).

Instead Bahrain Politicians spoke in favor of foreign workers that how these Skillful and experience worker despite of Old age are taking part in developing Bahrain.

Member or Parliament  MP Ali Al-Aradi First Deputy Speaker told Gulf News That there are sectors that demand people with professionalism and experience.

In Many sectors Age really matter Older people have more knowledge about their field.

More than 55% population in Bahrain Consists of Non-Bahrains although they are mostly labourers working on hard work demanding jobs but Skilled workers get Good Salaries and higher ranks.

Previous Post: « Best Way to Afford Dependent Fee Without Going Out from KSA
Next Post: What are Salary Delay Fines on Employers in Saudi Arabia? »