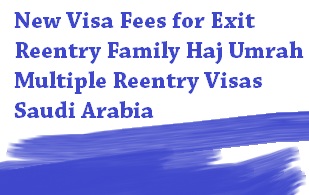 Saudi Cabinet Session meeting at Al-salam Palace Jeddah, which is led by deputy premier, interior minister and Vice Custodian of the Two Holy Mosques Mohammed bin Naif. In which The Council of Ministers on previous day Monday approved a new set if visa fee for Saudi Arabia.

These new visa fees were approved to get boost in state revenues that become low due to oil prices which cost 100 million dollars to Saudi Government in the year of 2015. There are also some new fines on Traffic violations

There also a huge difference between old and new visa fees such as A 3 month multiple exit re-entry visa will cost 500 riyals; previously, such a visa cost 500 riyals for six months.

Transit Visa(for those who Travelling Through KSA by Land) SR 300
Final Exit Visa through SEAports is SR50
Exit Re-entry visa having two months validity of single trip fee is SR 200 and SR100 for each additional month, within the limits of the duration of the stay.

The Good news for those Pilgrims who first time performing haj or Umrah is exempted from Visa fees; for second time the fee is Saudi Riyal 2000.

As Saudi Arabia is filled with huge population of expatriates who live inside ksa for work and most of them have to pay visa fee for themselves as well as in case they bring family with them So, the minor changes in these visa fee called JAWAZAT FEE in KSA is directly effects on these expatriates.