According to Minister of Manpower, Oman will have a new laws of labour in near future. Said to Time of Oman by Sheikh Abdullah bin Nasser Al Bakri.. The new Oman Labour laws is on design stage and expected to be announced in near future. The delay in announcement of new labour laws is caused by fresh economic changes in Oman. This delay allows analyst to make more new changes in labour before it will announced.

This was given while Session of Majlis Al Shura in which shura member ask Minister about the Omanisation. 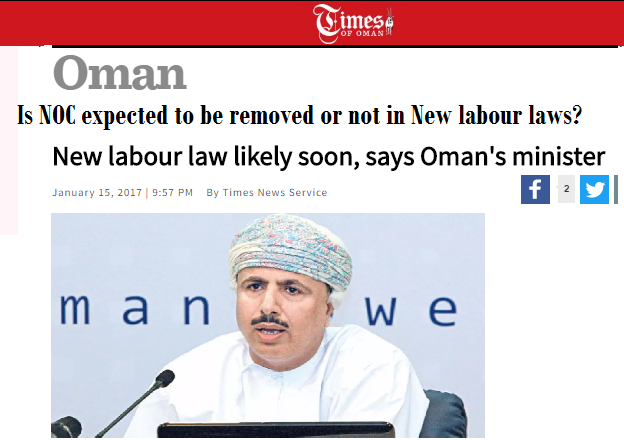 Is NOC expected to be removed or not in New labour laws? Well In our opinion people might thinking of this for long time, especially since when it was told by Said Bin Nasser Al Saadi which is advisor to the minister of Manpower that NOC will be removed he said it in October 2016. Expatriates wait for announcement of laws that will scrape NOC but nothing happened.

But after the new comments of Minister of Manpower that Oman will introduce new labour law very soon this will again give expatriates a hope that this new labour laws may be without NOC. But there is more chance that it will not happened as Oman want to increase the Omanisation Rate a process to reduce unemployment of Omani Citizens. It is revealed that 11.7 percent of workers in private sector consists of Omanis. Just Pray.

Regarding Numbers related to expatriates Al bakri said that every year 120,000 non-omanis join the labour market, most of them were blue collar workers working in constriction and real estate sector. These sectors are not permanent and these expatriate workers leave whenever the project or infrastructure is completed.
Must Join Oman Expatriates Community