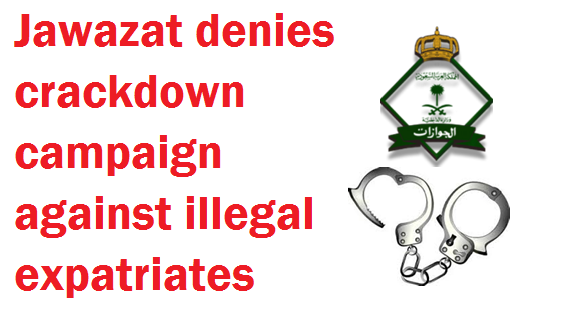 Jawazat Now denies this news first given by Al Watan Arabic and than circulated on any other sources. So there is no campaign launched by Jawazat to crackdown illegal expatriates. The whole article than published by other news and media agencies.

According to Al Watan Arabic daily illegal expats have choice to go back home on exit visas otherwise they will be deported from Saudi Arabia and got huroob status.

These phases are beneficial for these illegal expats as the leave kingdom on exit visas otherwise those expats who didn’t surrender during these phases they will be arrested, blacklisted(Huroob) and deported after facing penalties. They were also didn’t able to come back in Saudi Arabia on work visas.

In the second phase illegal expats requires to visit labor offices to complete procedure and than goes through jawazat offices for getting Final Exit visa after paying of fees and fines.

They need to verify their fingerprints at MOI to make sure that they don’t have any police case. If any criminal record caught they will be arrested and investigated to clear the record. Now those having clear record they will go through nine procedures: The whole above news is just a rumor and jawazat did not doing any thing against expats.