Saudi Passport department(Jawazat) warned the people to keep aware of the rumors around social media about iqama renewal fees and visa charges. Talal Al-Shalhoub, spokesman for the General Directorate of Passports gives statement against the false rumors of fees and said that Rumors are spreads around the Social Media about increment of Iqama Renewal Fees were totally false and people should not be believe what people said until official statements were given by Saudi Jawazat and published on Authentic news publishers.

Some of these false statement gives  SR2,400 to SR6,000 Iqama rener67wal fees which were totally wrong.

He also said that those who want to know official changes in any type of fees should read our official posts published on twitter account of General Directorate of Passport administered by Media Cell. In order to give you awareness I am mentioning the recent changes in Saudi Visa fees which were officially announced and could be start implementing from 2nd Sept 1st Moharram 1438. Jawazat make following changes in Visa Fees.

Transit Visa(for those who Travelling Through KSA by Land) SR 300
Final Exit Visa through SEAports is SR50
Exit Re-entry visa having two months validity of single trip fee is SR 200 and SR100 for each additional month, within the limits of the duration of the stay.

The Good news for those Pilgrims who first time performing haj or Umrah is exempted from Visa fees; for second time the fee is Saudi Riyal 2000. 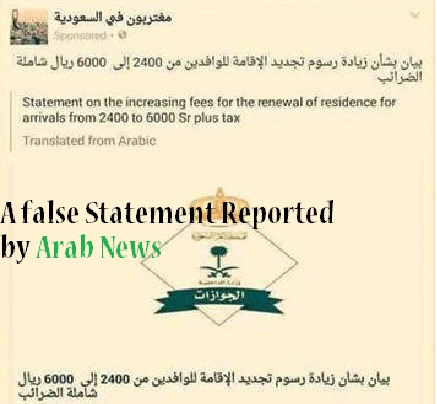 These are all official changes were made during Saudi Cabinet Session led by deputy premier, interior minister and Vice Custodian of the Two Holy Mosques Mohammed bin Naif.