Major Gen Khalafallah Al-Tuwairqi who is Director of Makkah passports police Told Al Madina Arabic Daily that workers or employess who run away without telling or contacting their sponsors will never be allows to return again in Saudi Arabia. The News Published in Saudi Gazatte.

The fine for Huroob worker is SR 100,000 if he get caught by immigration department and deported from Kingdom and banned from entering again in Saudi Arabia. 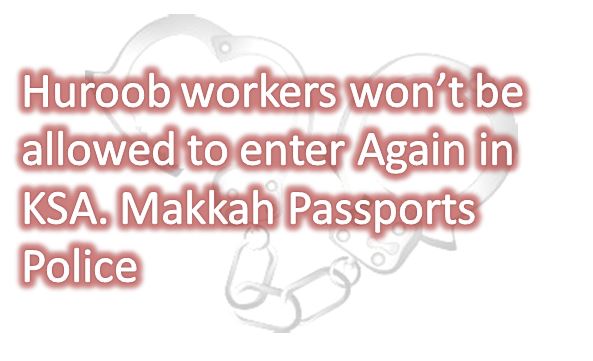 Last year Statistics showed that 480,000 expatriates who violation sponsorship and residency law were deported from only Makkah region. Many expatriates gives shelter to these illigel worker which means that they were also violating the law.

Those expatriates having expired Visa were also staying in kingdom in large numbers and some of their dependents were also working in kingdom on various blue collar jobs.

The director of Makkah Passports Police also said that those Saudi Nationals who harbor or transport these illegal workers may face fine of SR 100,000 with two year jail, with closure on business, and ban for recruiting any more expatriates for 5 years.

“Umrah pilgrims who remain in the Kingdom after the expiry of their visas will be considered illegal overstayers and dealt with accordingly,” he said.