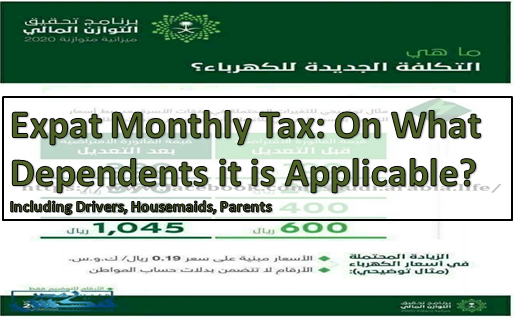 Passport Department Directorate of MOI now officially announced the implementation fee and the requirements of that fee. According to Arab News Jawazat(GDP) make monthly dependent tax mandatory in order to renew iqama as well as issuing of exit reentry, it is clear the if fee is mandatory for exit reentry it is also a major requirement for Final exit visa

Dependent simply mean a person who depend on someone for his needs and other things. In terms of dependents Visa it is clear that a person who is called as sponsor can issue visa for someone who is dependent on him

Which dependents are Applicable for Tax?

Once the new fee starts people might thinks that it is only for their family in which children and wife is included but certain local media sources and Arab News quoted that dependent no only means Wife or Kids it means all persons who sponsored by someone such as daughters, parents, wife’s father or mother, house workers, and drivers.

That is a reason behind on every expatriate iqama Resident ID there is  separate title for sponsor. If anyone is house driver and work for his sponsor, than this new fee is must be paid for him also.

Jawazat confirmed that there no limit of age on dependent fee, even new born baby’s parents also need to pay dependent fee. Those News born who were coming in the world after July 1st in Saudi Arabia are eligible to get birth certificate only after paying these fee.

All Nationalities:
There is no Amnesty of soft hand for any nationality, no one is exempted from paying these whether they are from poor countries like yemen or citizen from Syria.