On October 2015 huge numbers of amendments were announced in Saudi Arabian Labor Laws announced under Royal Decree No. M/46 of 05/05/1436H. On April 2016 some of new changes were make in Saudi Labor Law these changes were introduced to create balance marketplace for new foreign business and protection and development of local businesses or labors.

Laws were sometime complicated to read in original form so we summarize them in short key points, which allows our readers to understand these laws. These labor laws affects every worker in Saudi Arabia hence it is a pillar for relational between employer with his worker. So let see what were recent changes made in Saudi Arabia Labor Law. 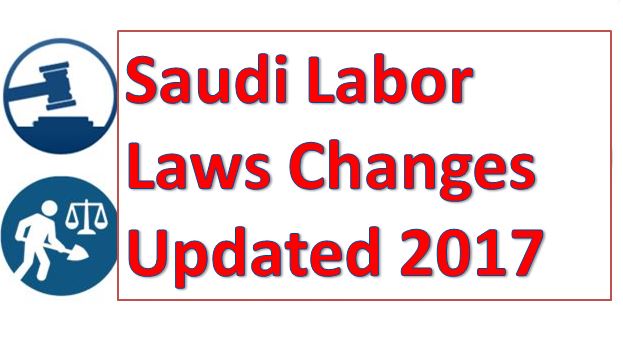 The minimum period of probation period is 90 days but extended up to 180 days. But this is only for once same employer/sponsor. Employee get next probation after change of sponsor.Or was not engaged by the same employer in the last six months.

Transfer of Job Place: Can employer relocate me to another location under Saudi Labor Law? – Article 58

If any employee not happy with current branch of company and want to change his geographical location than he/she submit written application to employer. But every year 30 days were allowed for employer to temporary change his employee location of job .

Notice period is time period when which employee have to state in his open job contract that when he want to resign he have to inform sponsor before 30 days. Currently maximum 60 days were set by ministry of labor in term of notice period.

Leave During Notice Period: during notice period employee get paid leave for full day or 8 hour so that he could able to find new employment.

Both parties must be agree in job contract for compensation. How much compensation is paid after termination of contract.

For infinite or permanent contracts 15 days compensation per annum

The balance of wages for the remaining employment term, in the fixed-term contract.

Fixed terms(temporary contract) can be renewed three times. If the time period become 4 year than it is considered as indefinite contract.

Employee has right to given with departing ticket as well as experience certificates. Employer must have to maintain all records related to employee such as fines imposed by Authorties, worker iqama information, dates, fines and prisons reasons etc.

Maternity leave: Female worker must be given with 10 weeks fully paid leave. The leave can also be increased to on more month but on unpaid basis.

A number of amendments increasing short-term leave have been introduced.

Paternity leave: leave has been increased from one to three days.

MOL Saudi Arabia give standard form of contracts and must be made by every registered company according to that standard. Contract must be written in accordance with laws.

All employers must provide aid to employees who were unable to work due to injuries causes while working the aid is in the form of finance or giving proper health care. The rate is equal to 75 % of worker wage. If the injury is severe or recovered late, it is also duty of employer to compensate the worker.

Previous Post: « What is Ardah Dance and How Saudi King Salman Performed It?
Next Post: Saudi Labor Laws: Service/Experience certificate »