Saudi Binladin group after completing several projects paid salary of 5 months to employee as well as some of employees were also given with termination letter. According to Saudi Gazette termination letters with due salaries were given to company employees which were working on projects now completed. Getting wages is always a moment of happiness for an employee same thing is happening in Binladin group as company in crises and many of their employees facing the problem of late payment at this situation those employees who get wage after a long time get excited and aiming to find a new jobs with new sponsor and those who couldn’t will go back to their home countries. 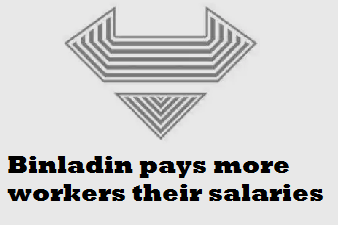 Saudi Gazette also stated that all of this happened after recent loan given to bin laden group and  company also sold some of their company shares in order to pay their workers.

According to Ministry of Labor and Social Development

Transfer 16,000 employees to other sponsors

Terminates more than  69,000 of their workers