According to Tawafa Establishment for the Arab Countries almost 95% of families and relatives of Arab pilgrims who died during performing Hajj prefer them to bury them in Holy city of Makkah.

Also according to local daily Al-Watan usually Iraqi families and relatives want their pilgrims to transfer towards their own country. Millions of Pilgrims performs hajj each years from these millions there are large number of Old ages pilgrims were included most of were die due to natural causes. In year 2016 about 47 pilgrims were died belong to only Arab countries omitting other pilgrims from Asian countries. 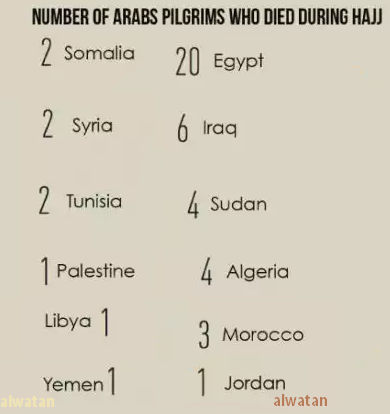 These 47 pilgrims were from following countries Egypt have highest numbers

While 2 two each from Somalia, Tunisia and Syria and 1 one each from Palestine, Jordan and Libya.

Director of the establishment’s public services department, Fahd Abu Talib All procedures were done using concered authority of Pilgrims home countries. The two options were given to relatives of deceased whether they want to bury their relative pilgrim inside Saudi Arabia or want to transfer the body to home country and bury him their.

If relative and family member want to bury their relative pilgrim inside Saudi Arabia than corpses will be kept in the morgue until after the Haj.

He also  said the deaths of all pilgrims this year were natural. “The majority of them were aged people,” he added.