We usually seen children around the world who memorizes Quran in few days but stories of disabled persons are really few. The miracle is done by a Five year Old boy named Hussein Mohammad Tahir who is visually impaired since birth, he does something which was not done by those persons having Good Health with no disabilities. He Memorize the Quran by listening to Radio. 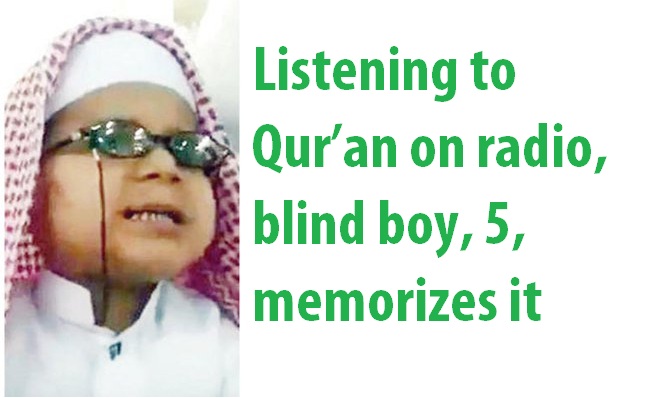 The story starts when the kid was in Jeddah His father due to his disability bought him a radio so that he could hear things. His Son tunes a Quran 24/7 channel and starts listening Quran daily. His father don’t even realize that his son is not only listening but also memorizing the Quran. He is doing this for three year when his father moved to Makkah after three years is Hussein asked his father to take him to Prophet’s Mosque. But his father set the condition to recite five verses of Surah Bakrah but hussein recites whole Surah.

Muhammad Tahir father of Hussein clearly surprised and take him to Quran teachers and Hafiz those confirms that your child memorize whole Quran but he need some lesson of recitation.

Hussein is now admitted to Prophet’s Mosque with a group of other visually impaired student.